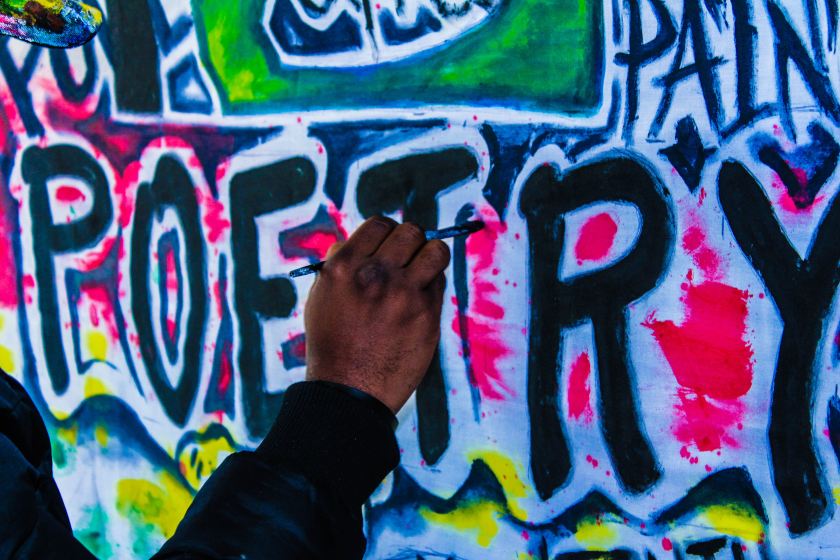 Last December, when I read a student’s second draft of their Treasured Object poem and saw that it contained the word “get” four times, I thought Really? Get? Four times?

It surprised me because I thought I had taught not only sentence variety, but word variety as well. It’s good to vary our words. Yes, a writer can repeat certain words in order to:

However, many times using the same word repeatedly —- especially a vague one like “get” — is simply a sign of lazy writing.

Here’s the second draft that a student turned in during our fall writer’s workshop:

I circled the four “gets” and in the margins, I wrote “Replace weak verbs.” When I returned it to the student, we talked briefly. I suggested his poem would be stronger with a variety of powerful verbs mainly because the reader wouldn’t be distracted and pulled out of the poem by all the “gets.”

The poem is much stronger, don’t you think?

Sometimes it just takes a little more time to think of a better word.

I also wondered to myself how this poem was the student’s second draft. How did the student who gave him feedback on his first draft not catch this obvious issue? Lazy editing?

Probably, I thought, acknowledging that enabling students to provide effective feedback is still one area in my high school writer’s workshop process that needs improvement.

This poem allowed a quick fix for a common problem. And it caused the unnecessary repetition to be readily recognized and quickly and effectively repaired. This is yet another reason I like teaching poetry. It truly does teach some concepts more efficiently than I can.

Thanks for reading again this week! How is your poetry practice? Do you encourage and/or assign students to write poems? Do tell. And by the way, my next post will focus on the “Treasured Object” poem. I love this easy-to-write poem that allows students to get personal and write about a belonging they wouldn’t part with for the world. Follow my blog to catch my next post!

Welcome to my teaching blog!

This is where I share my experiences from my high school ELA classroom. To contact me for permission to use any material on this blog, email me at marilynyung@gmail.com. Feel free to share and comment so we can get to know each other!
Thanks for stopping by,
Marilyn

Visit my other blog,  Marilyn Yung: Writes, Teaches and Wonders Where One Ends and the Other Begins.