This project was a long time in the making… brewing, I mean

This week, I’m posting several photos from a lesson and activity that’s been in the works for a few months, if not for a year. About a year ago, I found an article online on MentalFloss called “9 Facts about Coffee Lids You Didn’t Know You Needed.” The article featured a new book called Coffee Lids by architects Louise Harpman and Scott Specht. The book is a showcase and discussion on the design and evolution of the coffee cup lid. The book includes photographs of more than 150 coffee cup lids and includes commentary on the history of this ubiquitous example of how “form follows function” even in the most mundane of objects. 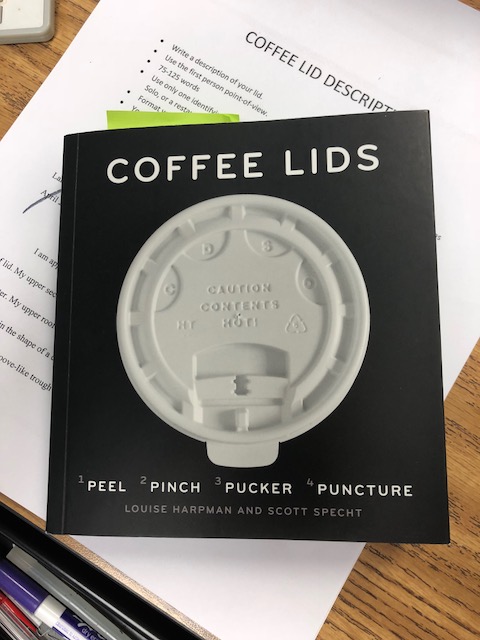 Last year, I created an AOW (Article of the Week) assignment based on the “9 Facts” article to introduce the coffee cup lid from a engineering and design standpoint.

It never worked out to assign the AOW last year, but I kept it in mind for this year and finally, with only two weeks to go until school’s out, I finally assigned the AOW assignment plus an additional activity where students could hone their descriptive writing skills.

The first requirement for this project was to collect as many different styles of coffee lids as I could find. I ended up with about 28 different styles. (Most of them were included in the book, by the way.) A handful of students and parents contributed some of the lids. I collected the rest from coffee shops, restaurants, gas stations, and from friends. I started collecting in January and by mid-April, I had enough to do the activity.

About two weeks ago, 8th-graders read and responded to the AOW. This assignment basically formed the introduction to the activity that they completed last week. That activity? To write a descriptive paragraph(s) about one of the lids, which would be written so descriptively that a reader could match the text to the lid without either being labeled.

Leaving my classroom to write their descriptions was beneficial because the gym and safe room are big enough that kids could space out and open their brown bag that contained their coffee lid. (The gym actually worked best, since kids could REALLY space out from each other.) The lid had a sticker on the bottom that students would use to match up to the cup’s descriptive paragraph.

Overall, the activity didn’t work as well as I hoped it would. On Friday, when kids matched up the lids to the descriptions, there was just too much matching to be done. The descriptions were simply not detailed or precise enough so the lid descriptions could be distinguished from each other. As a result, students gave up after matching up about six lids to their descriptions. Maybe next time, I should create a sheet that they fill out instead of having them write lid numbers on Post-It notes attached to each description.

Here’s a photo of the AOW that was assigned first:

Here’s the handout I created for the descriptive paragraph activity:

I definitely liked this activity for its STEM focus. It encouraged my students to think more deeply about the design and engineering of a common object that they’ve never given serious consideration to. Concepts such as froth accommodation, olfactory satisfaction, and slosh reduction, which were first introduced in the AOW, revealed to them how much design and innovation goes into throw-away items, while also providing some unusual domain-specific Tier 3 words to talk about!

It was fun to see them studying closely all the different kinds of coffee lids, really noticing the minuscule details of each and then transferring those details into their writing. For this first attempt at this project, maybe that’s enough.

Thanks for reading! I wrote this post quickly. If something is confusing, please let me know. Also… I realize some of the photos didn’t transfer well. Please let me know if you have questions and I’ll be happy to help. Also, feel free to comment with your thoughts or ideas on this activity. I like to try to incorporate STEM topics into Language Arts. What have been your experiences with STEM activities?

One thought on “My Attempt at a STEM-Themed Activity: Exploring Coffee Lids”